Visiting itinerary The Museum in the nineteenth century

The Museum in the nineteenth century 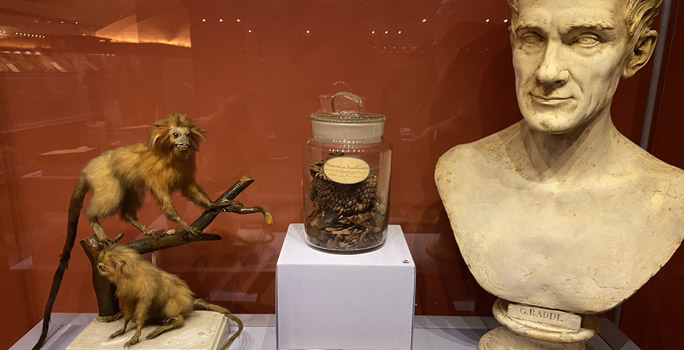 The nineteenth century is the century that marks the extraordinary development of the collections of the Museum of Natural History, but it also saw the loss of its unity. In 1841, botanists participating in the Third Meeting of Italian Scientists selected the I. and R. Museum of Physics and Natural History as the venue for establishing the Italian Central Herbarium. It is the first of a series of central collections that make the Florentine museum the scientific capital of pre-unification Italy.

The acquired importance and fame mean that various collections of inestimable scientific value come to the museum. Among the most important collections is the very rich Targioni Tozzetti Collection, This collection is a virtual museum by itself (also includes the Micheli collection), gathered over a century by three generations of scientists. After the end of the Grand Duchy of Lorraine, with the creation of the Institute for advanced practical and specialization studies, which in 1924 became the University, the museum lost its unity and was divided into collections attached to the individual chairs and transferred to the various institutes. Only in 1984 will the unity of the Museum be re-established as a widespread structure in various parts of the city.

Until the eighteenth century, the exotic material that flowed into the museums consisted of collections gathered by private individuals who later on donated them in block.

Giuseppe Raddi’s trip to Brazil in 1817 is the first example of an expedition organized by an Italian museum to make a naturalistic collection. Soon, this practice became habitual for naturalists working in the museum, such as Parlatore who in 1851 made a botanical expedition to Lapland. However, after the unification of Italy, scientific expedition began to combine naturalistic interests with political and economic interests. With the birth of the Italian Geographic Society, founded in Florence in 1867, this practice was conducted with ever greater integration by numerous explorers, such as the Florentine Odoardo Beccari. On his various journeys, he enriched the various collections of the museum and in the book Nelle foreste di Borneo (In the forests of Borneo) narrated his first adventure from 1865 to 1868 in Sarawak. The book was published in 1902 and translated into several languages. It inspired Emilio Salgari’s saga of Sandokan’s adventures set in the places and among the characters known exclusively through the narration of Beccari.

Not one, but many

In the second half of the nineteenth century, due to the development of new disciplines, the paradigms of naturalistic collecting changed significantly. With the birth of biogeography, the goal is no longer the search for individual representative specimen for each species, but instead aims to collect samples from different locations to document the geographical distribution of the species. One example is the Central Collection of Italian Vertebrate Animals founded by Enrico Hillyer Giglioli with series of dozens of specimens from all over the country, as in the case of flamingos.

The serial criterion was also applied in the process of collecting artifacts to represent human cultures. Elio Modigliani, a Florentine scientific traveler, gathered important zoological and ethnological collections in different areas of Indonesia between 1886 and 1894.

In the writings of the time, we find clear reference to series of objects collected by Modigliani, including the mysterious and fascinating series of pustaha books.