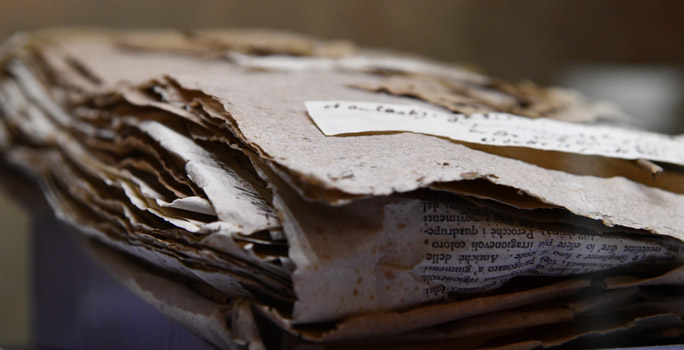 Niels Stensen was 28 when he arrived in Florence in 1666 at the court of Ferdinand II. Stensen was already a renowned anatomist, fame earned in his hometown Copenhagen as well as in Amsterdam, Leiden and Paris. With an interest in the origins of fossils, he studied Tuscia fossils and the sedimentary strata that contain them. Comforted by exchanges with Galileo’s disciples of the Cimento Academy, in 1667 he published in Florence the geometric proof of the organic origin of “stone tongues” and fossil seashells. In De Solido Intra Solidum Naturaliter Contento of 1669 he outlined the first history of the earth in which he defined the geometric principles of modern stratigraphy. In this book he recognised that the Apennines were made of rocks older than those of the Tuscan hills and identified for the first time the phenomenon of the constancy of angles in crystals. He worked for Cosimo III to create a conceptually modern museum. To build up this museum he retrieved a choice of naturalistic specimens that belonged to the collections of the grand duke from Pisa to Florence and collected minerals and fossils in several European localities. Stensen converted to Catholicism during his stay in Florence. He was ordained as a priest in 1675, became bishop in 1677 and was buried in the San Lorenzo Church in Florence. In 1988 he was proclaimed Beatus by Pope John Paul II.