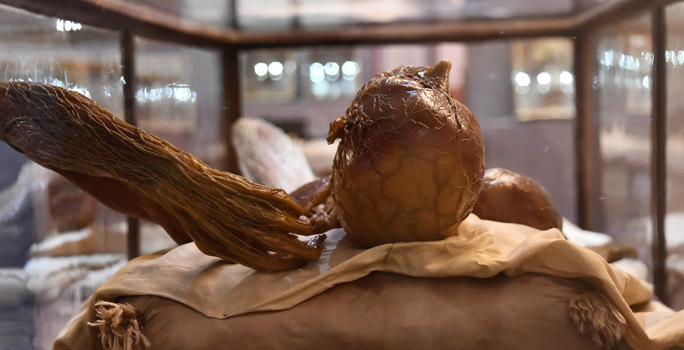 The production of anatomical models in wax is one of the elements that characterize the project of the Grand Duke Pietro Leopoldo who establishes, around 1771, a ceroplastic workshop in the Museum.

The quality of the preparations and the level of accuracy achieved by the Florentine wax modelers represent a significant contribute to the Museum’s international reputation.

The original museum project does not include the presence of professors or guides, therefore visits to the museum are based on the principle of autonomous learning and visitors can acquire different levels of knowledge depending on their cultural preparation.

For educated visitors, in correspondence with the anatomical wax model placed in small drawers below the display cases, there are watercolor paintings. They reproduce each preparation, highlighting important points and marking with numbers the reference to explanatory texts. The anatomical collection is not intended to be a teaching tool for medical doctors, but, as in the rest of the museum, a material encyclopedia made available to citizens.

Clemente Susini stands among the many artists who contributed to the success of the Florentine workshop.

He is certainly the most famous of the wax modellers. Later, the tradition was kept alive by various modelers including Francesco Calenzuoli, Luigi Calamai and Egisto Tortori. The activity of the workshop ended with the death of Tortori in 1893.

Of course, the success of the workshop was based on the very fine dissections and guidance of scientific experts such as Paolo Mascagni, Felice Fontana, Filippo Uccelli and Tommaso Bonicoli. The first decades of workshop were dedicated exclusively to human anatomy and botany of natural sized models. However, starting with the 19th century, models of comparative anatomy and plant physiology are produced at the microscopic level. These models document the great advances in optics thanks to Giovan Battista Amici, director of the Astronomical Observatory of the Specola and inventor of the homogeneous immersion objective, which corrects the chromatic aberration of microscopic images. The highly defined images obtained with the new instrument become the subject of new models that allowed waxes to show the invisible to the public.